All Collections
Other broadcasting platforms
GPS
How to appear on Apple Maps, with a pin on the iPhone app:

How to appear on Apple Maps, with a pin on the iPhone app:

Publish local information about your establishment, edit your opening hours and change your photos on the iPhone’s Apple Maps GPS!

Written by Clara Demetz
Updated over a week ago

The 16 million iPhone users in France currently use Apple Maps three times more than they do Google Maps! Thanks to its marketing efforts and commercial impetus, Apple has made its Apple Maps GPS the 3rd most widely used iPhone app after SMS and email!

Until September 2012, Apple Maps was based on Google Maps data. Since then, Apple's mapping system has used data from various suppliers, primarily TomTom but also Partoo, out of a desire to cut ties with Google 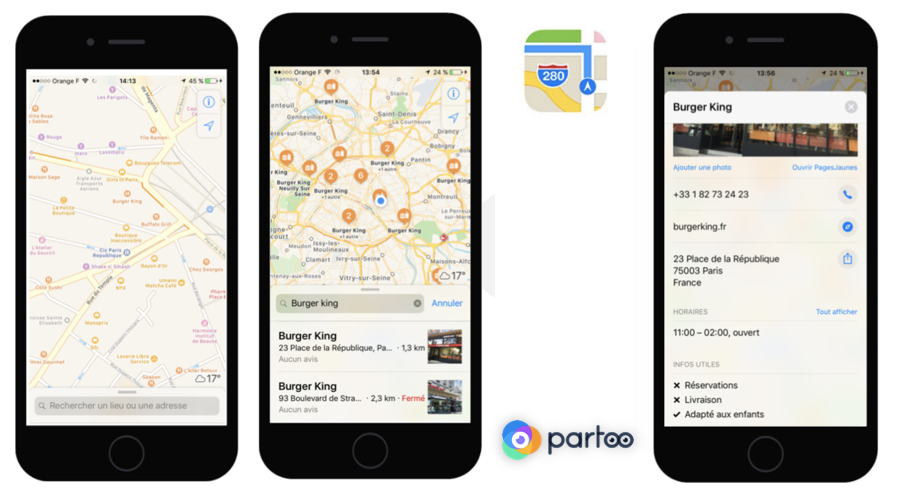 Why is it useful to be on Apple Maps?

Apple Maps allows users to find your establishment using the ‘pins’ you can see on the iPhone on the far left, above. Customers can also save their favourite establishments to their address book and share them via SMS, e-mail, Twitter and Facebook.

The Apple Maps search engine works for both addresses and points of sale, for which information such as contact details, opening hours, reviews and photos are displayed.

Did this answer your question?